That Time SCCA Kick-started Small Truck Sales Into the 1990s 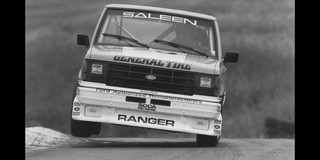 When you think about the Sports Car Club of America’s legacy, what comes into your mind?

Depending on your viewpoint and personal experiences, there are unlimited options. It might be grooming history’s greatest drivers (think Gurney, Folmer, Penske, Andretti, Vasser and Rahal); it may be developing the world’s largest and most competitive autocross events; it might simply be expanding your personal friendships with like-minded enthusiasts.

But please, allow us to propose one additional legacy item that you may not have considered. What if we told you that the SCCA kick-started the small truck sales explosion in the 1990s?

Seems farfetched on its surface. The word “Sports Car” is literally there in the title. And small trucks – think the Toyota pickup, Ford Ranger, etc. – aren’t really made for towing race cars. So how in the world did SCCA help this at all?

Let me introduce to you, nearly lost to history but unforgettable to anyone who saw it, the Coors Racetruck Challenge.

It was, admittedly, just about the most bizarre thing to ever hit a race track – and we all know that’s saying something. But for two spectacular years, it had literally everything.

“C’mon, man,” you’re saying. But really, it had EVERYTHING. Bump drafting. Three wide racing. Punting into corners. Low horsepower, low aero vehicles that leaned on each other all race long. Road racing future legends like Peter Cunningham and Steve Saleen winning championships? The Coors Racetruck Challenge had it.

“That’s great racing, but that’s not everything! If it truly included EVERYTHING, it would need something weird – like a picture on the cover of the National Enquirer with an actor who ‘cheated death’ in a crash!” I can hear from someone in the back.

Oh, reader – the Coors Racetruck Challenge did, in fact, land on the cover of the National Enquirer. Jason Bateman may be fending off a drug cartel in OZARK on Netflix these days, but it was a small pickup truck that almost got him originally.

Eventually, the manufacturers decided that destroying pickup trucks wasn’t quite the way they wanted to showcase their product, and the money dried up. A few years later, a revamped version of purpose-built trucks made their oval debut under the NASCAR banner.

But for those in the know, the Coors Racetruck Challenge is still talked about.

Our friends at Road & Track recently revisited it in some depth. We recommend reading more about it here.